94 replies to this topic 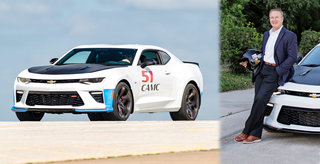 TOPEKA, Kan. (May 15, 2017) -- After an extensive and thoughtful search process, Sports Car Club of AmericaÂ® proudly announces Michael Cobb as the organizationâ€™s new President and Chief Executive Officer.  An SCCAÂ® member with more than 25 years of diverse experience transforming brands, companies and cultures, Cobb will officially embrace his new role June 1 with the Club.

The Dallas-area resident comes to the SCCA after serving as Chief Marketing Officer for Goldâ€™s Gym, one of the most recognized names in fitness. During his tenure at Gold's Gym, Cobb leveraged his marketing, business development and operations leadership skills to help reposition the company, expand the brand's footprint and deliver new products that capitalize on emerging consumer trends.

Lee Hill, Chairman of SCCAâ€™s 13-member Board of Directors, said Cobb emerged as an extremely strong candidate from the seven finalists considered for the position. After a 13-0 vote, Cobb was identified as the unanimous choice by Board members.

â€œThere were three very strong candidates at the end of the interview process who all met the criteria being sought,â€ Hill noted.  â€œMichaelâ€™s skill and experience in marketing and as a franchisor gave him an edge, and all 13 members of the Board believe heâ€™s best for this position.  Michael can come into this exciting opportunity knowing the Board is solidly invested in his hire, which will give him a strong foundation for future success.â€

Prior to Goldâ€™s Gym, Cobb established a strong track record developing and operating several different agency business units for Omnicom, one of the most dynamic marketing communication companies in the world. He has led marketing efforts for brands such as Pizza Hut, Burger King, Pepsi, Lipton, KFC, Dannon and Frito-Lay. He has shown a particular knack for â€œactivatingâ€ brands and businesses with solutions that attract customers, inspire stakeholders, create community and drive growth.

Cobb graduated with a bachelorâ€™s degree in advertising from Sam Houston State University, and went on to graduate from Omnicom's Global Senior Management Program and The STAGEN Integral Leadership Program.  In his new position as SCCA President/CEO, Cobb is tasked with structuring, building, managing and leading effective staff and operational efforts. He will partner with the Board of Directors and staff to craft, update and forward the vision, mission and strategic goals of the organization. His role includes functioning as a leader, ambassador, spokesperson and representative, as well as becoming the â€œface of the SCCA.â€ The assignment requires collaboratively engaging with and supporting the Board of Directors to ensure highly effective governance, leadership and policy setting efforts. He will model and inspire a positive, cooperative, inclusive and fun Club culture and brand, as well as advance the highest safety and ethical standards on behalf of SCCA members, regions, participants, staff, spectators and other key stakeholders.

â€œAt the highest level, this opportunity is about building relationships and stewardship,â€ Cobb said.  â€œStrengthening relationships based on trust across the BoD, regions, staff, membership and our valued partners will continue to be job one. And with regard to stewardship, it is about doing all we can, collectively, to ensure we build a solid foundation that sets the SCCA up for much more success across the next 70 years.â€

While Cobb arrives at the SCCA with fantastic professional credentials, he also brings with him a love of motorsport. He grew up in admiration of his father, an autocrosser who won local SCCA events with regularity. Racing firmly embedded in his DNA, Cobb established his competition â€œcareerâ€ at an early age by winning a Texas Soap Box Derby event, and competed in the Nationals in Akron, Ohio. In 2007, he began participating in SCCA autocross with the Texas Region, claimed the Novice of the Year award in his first full season of competition, and competed in the Tire Rack SCCA Solo Nationals. Through such participation, Cobb discovered what keeps SCCA members returning year after year.

â€œOf course, the thrill of competition and having fun with cars is a big part of the SCCA lifestyle,â€ Cobb noted.  â€œThe camaraderie and â€˜relationshipsâ€™ built through Club activities are a huge part of the equation, too. I am just as passionate about building relationships based on trust, respect and integrity as I am about winning my class at the next autocross event.â€

The search for a new President/CEO began late last year.  Before applicants were sought, SCCAâ€™s Board of Directors worked extensively with a consulting firm to outline attributes for an ideal candidate. Nearly 100 people applied for the position.  The Board of Directors, after two anonymous votes, narrowed the field down to seven candidates for the interview phase.  The finalists completed surveys that helped identify strengths and management styles in March 2017 before in-person interviews with the Board of Directors.

Unable to start a separate thread due to some technical difficulties, but here is the conclusion to the situation that necessitated this change.

What do you guys think of the justice being served here?

It seems to light for me, SHE stole this money and used it to enrich herself and family, she will only have to repay what she stole, not what she had GAINED and I believe that sends the wrong message, where is the deterrent? 51 months possibly reduced to less than half (not specifically in the article but common). I would do that in a heartbeat if I was allowed to grow 4 million over 4 YEARS and keep all my PROFITS!!!!!!!!

HAHAHA good 1, sorry your incapable of having an intellectual conversation about our justice system, I only bring this up because it hits close to home, an the threads are getting repetitive so I thought some off topic discussion about whats going on in our country would spice it up.

Always happy to see you swinging, you are just too funny

I would do that in a heartbeat if I was allowed to grow 4 million over 4 YEARS and keep all my PROFITS!!!!!!!!

Then why don't you go do it then

Then why don't you go do it then

Your dime I'll do the time

Pardon my confusion but Mr. Cobb is the new club president, right?

I believe David L is referring to the Pro Racing president, no?

I would do that in a heartbeat if I was allowed to grow 4 million over 4 YEARS and keep all my PROFITS!!!!!!!!

And this in a Nutshell describes your character!  Sad!

Pardon my confusion but Mr. Cobb is the new club president, right?

I believe David L is referring to the Pro Racing president, no?

Unable to create new thread this is the closest I could get.

And this in a Nutshell describes your character!  Sad!

Re read it Jim, I said I would do 51 months, I would never STEAL from anyone,

Unable to create new thread this is the closest I could get.

Re read it Jim, I said I would do 51 months, I would never STEAL from anyone, but I'm glad to see so many supporters for the degenerates of society.

I doubt you could do 51 hours...  People that have been in aren't so cavalier about it.  The plea includes a forfeiture and restitution provision.  It's ignorant and naive to think they'd let the defendant keep the proceeds.

EDIT:  Check your Fed sentencing guidelines.  The defendant will serve most of that 51 months.  They are eligible for 54 days credit per year for good behavior.  The Feds don't parole.   The supervised release will happen under the terms of the sentence.

She was ordered to repay approximately 4.25 of the 4.5 she stole, that does not include any proceeds and I have a hunch there  were proceeds.

For goodness sake, this is a forum about racing. If you have a problem with sentencing guidelines, or the justice system in general, go find a forum that deals with that.

David, why couldn't you create a new thread? Why the burning desire to do so?

She was ordered to repay approximately 4.25 of the 4.5 she stole, that does not include any proceeds and I have a hunch there  were proceeds.

The forfeiture assets are in addition to the cash restitution.  The entire sum included the property that is being seized.  You don't have to be good at math to know that stash of vehicles could be in the $250k range.   The details should be in the plea agreement.  They don't let you keep what was stolen when you do a deal like this.  If they thought there was more they'd have went after it.

shoot. I wish it were that simple too

David, why couldn't you create a new thread? Why the burning desire to do

Well since we talked about Scott Tucker when he had some issues(similar) and everyone was eager to chime in I just thought this would go over just as well.

Neil, these cars are easy to drive, thought you would have received the special instructions from your crew, you know.

David, why couldn't you create a new thread? Why the burning desire to do so?

Several reasons.. David is jealous that he doesn't make very much money. He resents anyone who spends more than he can racing and thinks the only reason he isn't among the elite is our stupid little fish bowl is because people have out spent him and cheated him. He cant stand Mike for those and perhaps other reasons and is basking in the glory of Mike hard times. Mike is a pretty big target and likely the first to admit it. However comparing him to Scott Tucker is a huge stretch, a joke actually. The difference in this scenario is Mike( the guy you are trying to embarrass and sole purpose of your posts) is not, has not and will not be charged with any wrong doing. His wife, mother of all his kids was charged solely. Mike didn't get out of it, he was not involved. She committed a crime, was sentenced and will have to pay for her crime. Unfortunately so will Mike and his children. This has to be about one of the worst possible scenarios to hit a family. I would not wish this on my worst enemy, even Steve Gorrarian when I hated him the most.

This is not about racing and our mini soap opera, this is real life. Give it a break! Taking any pleasure in blasting Mike and celebrating this here as you are shows what a low life troll you really are.

Well said Jim! And thanks for saying what most have not! This whole post should be errased as it someone posting negatives here is not healthy for our group whatsoever!