Mazza Vineyards Back to Celebrate 2018 with SCCA 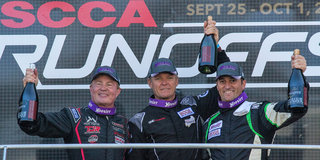 TOPEKA, Kan. (Feb. 13, 2018) â€“ Mazza Vineyards will again partner with the Sports Car Club of AmericaÂ® in 2018 as the â€œOfficial Sparkling Wineâ€ of the Hoosier Racing Tire SCCAÂ® Super Tour, Tire Rack SCCA ProSoloÂ® and the SCCA National Championship RunoffsÂ®.  Podium finishers at each of those events will be rewarded with a bottle of Mazza sparkling wine with a custom label commemorating the achievement.

â€œItâ€™s great to be back with the SCCA in 2018,â€ said Bob Mazza, founder and principal at Mazza Vineyards. â€œIâ€™ve been involved in sports car racing since the early 1990s and followed the SCCA ladder system.  Iâ€™ve even managed to claim a U.S. Majors TourÂ® class win.  I know how great it is to come home a winner and proud that Mazza Vineyards can be part of the victory celebrations at Hoosier Super Tour and Tire Rack ProSolo events, as well as the 2018 National Championship Runoffs at Sonoma Raceway in California.â€

Mazza Vineyards was founded in 1973 by Bob and Frank Mazza. Since then, the vineyard gained prominence, counting several awards to its credit.  Located in North East, Pennsylvania, Bob has served in an official role to help further the needs of wine makers in Pennsylvania. The flagship vineyard is also part of Lake Erie Wine Country and the Pennsylvania Winery Association. The company has grown to the point where the Mazza family has moved into producing other high-end spirits and beers. Mazza Vineyards is the familyâ€™s flagship brand, while Mazza Chautauqua Cellars and Five & 20 Spirits and Brewing are the newer, New York state-based brands.

Deanna Flanagan, SCCA Director of Road Racing, is pleased to have Mazza Vineyards aboard again this year as the companyâ€™s sparkling wine is an important part of victory podium ceremonies.

â€œA bottle of Mazza sparkling wine with a customized label will be presented to podium finishers at various SCCA events,â€ Flanagan noted. â€œThe bottle is another keepsake which each driver can save to mark his or her achievement and success.  Plus, Mazza Vineyards is helping to continue the tradition of spraying a bottle of bubbly atop the podium, a celebratory standard set by the great Dan Gurney.â€

The Sports Car Club of AmericaÂ®, Inc., founded in 1944, is a 67,500-member motorsports organization that incorporates all facets of autocross, rally and road racing at both Club and professional levels. With headquarters in Topeka, Kansas, the SCCA annually sanctions over 2,000 events through its 116 Regions and subsidiary divisions. Much of the SCCA's activities are made possible with support from the following Official Partners: Chevrolet, the Official Truck of the SCCA; Hawk Performance, the Official Brake Products of SCCA; Mobil 1, the Official Oil of SCCA; Sunoco, the Official Fuel of SCCA; and Tire Rack, the Official Tire Retailer of SCCA. To learn more, please visit www.scca.com.

Back to Racing News