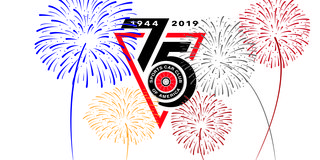 TOPEKA, Kan. (May 4, 2018) -- From a handful of car enthusiasts meeting in a brick home at 140 Mount Vernon Street in Boston, to a nationwide Club boasting 67,500 members, the Sports Car Club of AmericaÂ® has come a long way since its 1944 inception.

On February 26, 2019, the SCCAÂ® will officially celebrate 75 years of having fun with cars. To commemorate the achievement, a special SCCA 75th Anniversary Diamond logo badge has been designed and will be featured in 2019 across the width and breadth of Club activities.

The logo, created especially for the SCCA, is meant to communicate three key points. Through the overall design and use of a â€œdiamond shapeâ€ as its foundation, the logo conveys a sense of past, present and future for the SCCA. In concert with the above, the design has at its heart SCCAâ€™s legacy mark -- the â€œwire wheel.â€  Boldly atop the special mark is SCCAâ€™s â€œbirthâ€ year, 1944, and the year of its 75th anniversary, 2019, with an ornate â€œ75â€ graphic curling throughout to draw together all the design elements.

Mike Cobb, SCCA President & CEO, noted a preliminary draft of the SCCA 75th Anniversary Diamond badge was introduced at the 2018 SCCA National Convention in January.  Beginning late in 2018, and throughout the entirety of 2019, the badge will be deployed across a broad range of communication tools and branded products.

â€œYou only get one 75th anniversary, so we want to make the most of it,â€ Cobb said.  â€œWe are looking into many other unique ways and opportunities to highlight the Clubâ€™s momentous milestone, so stay tuned to see what we have in store.â€

A clean version of the logo (sans firework art) will be available for Region use shortly, along with information as to how SCCAâ€™s 116 different Regions will be able to deploy the official SCCA 75th Anniversary Diamond mark at a local level.  There will also be opportunities to create special SCCA 75th Anniversary Diamond gear that incorporates individual Region badges and logos.

Now if they would just rebrand that stupid spoked tire logo.