Does anyone else do ice racing or ice autocross in Miatas?

23 replies to this topic

i ripped a stud out of one of mine last week, so i made a new one last night. i ripped the stud out of my one leaker, so im really hoping to not have a leaker anymore. my other tires will hold 30psi for weeks, that one required pumping up in the morning, but would hold throughout the day.

the tire model that mine were made of isnt made anymore, so i had to buy a different tire. which means a different stud pattern as well, im curious if ill be able to tell a difference in grip, and ill for sure be putting it on a front wheel so i dont fudge up the diff.

The VLSD is probably a good choice, since you don't need much differential torque (I don't love the word "lockup" for most LSD types), and you are running in cold temps, and you are presumably not running long stints.  For comparison, a VLSD that hasn't leaked its viscous fluid out is still good for  several "miles" (a few "laps") on a dry pavement racetrack on a summer day.

The Torsen is probably a poor choice, primarily because of all the time it is going to be "open" when drifting around on slick surfaces, but perhaps the Mad Max studded tires unravel that assumption, at least in part.  I don't think of the Torsen as "locking up" severely at all, but their behavior is hard to test without special fixturing.  They are essentially either "open", or operating according to their Torque Bias Ratio (a function of the pre-determined gear helix angles in addition to the less reliable amount of "friction" internal to the device).

The 1.6 ring and pinion is fragile, but the 1.8 ring and pinion is heavy.  Like all rotating mass, it helps or hurts you more when driveline RPM is changing rapidly, which would appear to fit your ice autocross scenario more than climbing the front straight at Road America.

I suspect that welding a diff will offer no advantages and will only exacerbate reliability problems with gears and bearings.

Few teams or drivers do A-B or A-B-A testing on LSDs, and LSDs are probably one of the most misunderstood, hype-marketed, and poorly-applied devices that seemingly every model-specific forum has pages and pages of strong opinions about.

There is one thing we can be reasonably sure of, though - that spinning a driven wheel is bad for laptime, and it doesn't take much differential torque to control a measly Miata engine to avoid wheelspin.  If you can determine if you are, in fact, spinning an inside driven wheel (more than the outside one, anyway), then we can be near-certain that your times will go down if you get a Salisbury a.k.a. "clutch" type LSD like a MazdaComp or Cusco fitted.

There is other misinformation in the above thread particular to the Torsens, of which there are at least 4 versions legal for SM.

dunno, all i can report is what happens. the fronts survive, and the rears go pretty often. i think the car spends most of the lap on the bump stops in the rear and ice is not like pavement, its rough as shit, and the impact loading, esp with slip angle, destroys the rears. 90+ percent of the lap is spent on throttle, with slip angle, going over 1-4 inch ice ridges and bumps.

ice is a unique surface, very unlike driving on pavement, even bumpy pavement. just last weekend, i broke the upper radiator mount brackets on this car, from so much shaking around. we also debeaded two tires, and almost rolled a porsche cayenne. we also jumped a WRX, you know, for the fun of it. 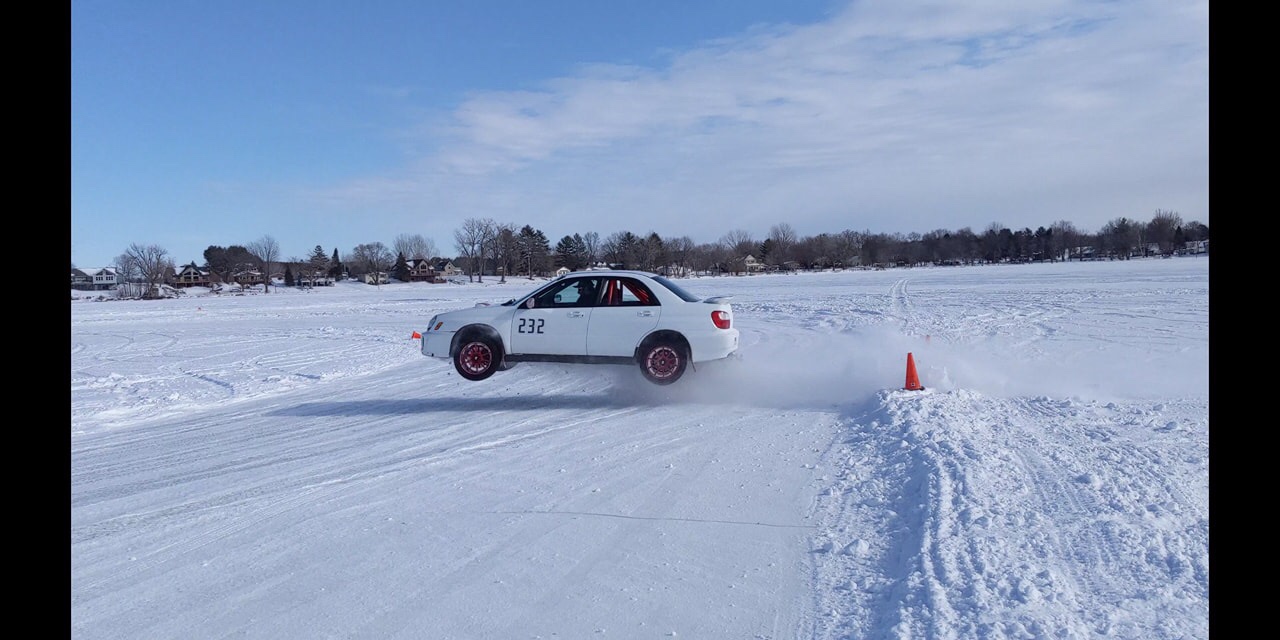 id like to get a mazdacomp/cusco in this car, but i dont have the time or money this season. maybe next year.

since making this thread, i have changed the setup of the car dramatically, and to dramatic success.

I switched to a koni yellow coilover setup. spring rates are about double stock (330F/220R IIRC), with 7 inch springs. so stock ride height. i also switched to the firmest bump stops koni makes, and about 10mm longer than ground control had them. i run the shocks with as little rebound as possible, so as to let the car "jack up" and stay off the bump stops. since going to this configuration, i have not destroyed a single wheel bearing, front or back.

i ran a mazdacomp 1.6 LSD for one year, and it was fantastic. loved everything about it handling and snow plowing wise, but i got scared of breaking it (and needed it for my 1.6 SM) so i put in a torsen this year. the torsen is just fine when sliding around, but i do get stuck a little more often with it compared to comp, so it does less well at snow plowing. good handling though, and the reliability is eases a lot of my fears.

I also added rally lights, and a harddog double diagonal. going into a snowbank at 40+ sideways has a way of convincing you to get a roll bar.

the car is now reliable, handles well, and is a hoot to drive.

if i want to go faster, im going to need more power. scoping out 996s and C5/6s as my next ice build. i really would prefer to not supercharge or engine swap this car due to reliability. i also casually looking into 6 speed swapping it. 6 speed + 4.3 would be significantly shorter gearing, and thats probably more reliable, cheaper, and easier than trying to get 10-20% more torque out of the 1.6L.

Back to HPDE / Autocross / TT / Rally