Is this car worth the drive to look at?

28 replies to this topic

Hello, I'm really new to this so please bear with me. I'm looking for a starter car to build a racer from and having a pretty difficult time finding anything locally. This car is about 3 hours drive from me. I wouldn't bid on it without going to look underneath for rust and whatnot, but I'm thinking someone with a lot more experience with these cars could probably look at this picture and tell me if the frame is likely to still be solid or not. Rest of car looks fine.

Would you drive 3 hours to inspect this thing or just move on? 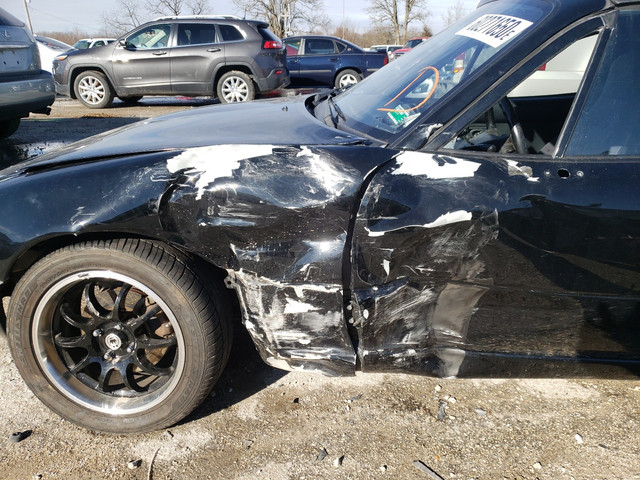 if you are new, i would recommend not building your own car, buy one already built.

you'll end up "building it" anyway, but at least it gets your butt in the seat, faster, and cheaper than building yourself.

I'd probably skip it.  Might have tweaked the front subframe and other suspension parts on that corner are guaranteed to be bent.

There doesn't seem to be much on the Kansas City craigslist but looks like Facebook Marketplace has some stuff around you.  Ex:

I echo to get an already built race car. Will save you a ton of money.  NAs are CHEAP right now

definitely keeping an eye open for ready built cars as well just haven’t run across much. Deleted my facebook account years ago so I forget about that marketplace, good tip.

Where are you from? There are cars always for sale that never get listed. So tell us where your looking and what is your budget and likely someone knows of one somewhere.

I am in Kansas City so pretty much willing to look at anything in MO, KS, NE or IA. I'd like to keep the initial outlay under 10k so not expecting too much. Just something I can upgrade over time as I learn. Budget was higher but I just had to replace a sewer line :-/

I am originally from kcmo! So good to have you!

Steve shiefler is over in st. Louis area I beleive and he knows most of the local guys in the area your in, he frequents here maybe he will have some good ideas for you to help you get started! If I here of someone out that way I will point them in your direction! Good luck on finding what your after!

Hey Bryan, I don’t know of anything specific between here and there at the moment but I’d be happy to check out anything that pops up in this area.

Thanks guys, I'll be keeping an eye on this thread if something pops up. Also been emailing with Mike McGinley who is the local SCCA guy so I'm sure something will turn up before long.

its also not that expensive to ship cars. i bought my race car from the west coast, and i live in the mid west and it was like ... 600 bucks? to ship it.

Feeling pretty dumb today as I just discovered I've been searching racingjunk.com all wrong. If you go there and just look in the 'mazda' category you only see RX-7s but looking at road racing > nasa sm revealed a few more options.

This is in MO and in need of a transmission but otherwise seems ready to roll:

Interesting. I didn’t realize Crispin had gotten back in a car that recently. More pictures of the cage would be nice. How tall are you? Figure about $1300 for a transmission shipped if you want a freshly prepped one, assuming the clutch is good. Looks like it’s still on the Bilsteins so that will be another $1400 shipped for Penskes before it can run Majors or HST. It’s used so always assume a few other surprises.

An NA 1.8 is always a tough call, but if you are looking for a car to get started on a budget they can be a good choice.

i mean, id just toss a 100-300 dollar junkyard/partout transmission in there and get out racing. more important to start driving than have a blueprinted transmission.

i mean, id just toss a 100-300 dollar junkyard/partout transmission in there and get out racing. more important to start driving than have a blueprinted transmission.


Part of me agrees with you. We ran the original transmissions in our cars for years without a failure. On the other hand, if an unknown used transmission fails at the track, forfeiting your entry fee, travel expenses etc., what did it REALLY cost you? And then you are back to square one. Not saying it’s a slam-dunk choice, just that it needs to be weighed. If the extra expense means giving up a race or two then roll the dice (or rethink whether racing is even financially responsible at this time).

I’m 5’9” so more concerned with width than height

Feeling pretty dumb today as I just discovered I've been searching racingjunk.com all wrong. If you go there and just look in the 'mazda' category you only see RX-7s but looking at road racing > nasa sm revealed a few more options.

This is in MO and in need of a transmission but otherwise seems ready to roll:

If the engine is healthy that is a good value IMO.

Starting out junkyard transmissions should be good. I have 2 cars with cages by the same builder, both solid, altough he used the thicker walled tube. I really don't like what he did on top of the fuel pump, so mine don't have that anymore.

If this has the upgraded billies you should be good for a year before having to buy penske's.

I'm with Tom! And transmissions are a coin flip! I had a "Rebuilt" tranny blow up 3rd gear 2nd day...of course the seals, shift forks, syncros, roll pins were all perfect! I have no problem sticking in an used tranny if it seems to dry shift fine!

Bryan, have you spent any time at the track looking at, setting in and asking questions about Spec Miata's? If not backup and start there. ANYONE starting in Spec Miata today who doesn't have the knowledge they need if their building/buying less than a 1999 plus car will be sorry if their in the game long term. Ya guys I get it there's a 1997 or less that makes the grade with a superior setup and driver. Make yourself a cost list for a 1997 and make yourself a cost list for a 1999 plus and compare. Other than the cost of the basic car, the costs should be similar. Don't forget you'll likely want a hardtop although not required.

Most of all, Have Fun.

I haven't made it to the track yet but I'm planning to when they get rolling for the season. I have had some good phone conversations with the regional SCCA guy here and I have a lot of iRacing laps, but I understand that's very different from a real car with Gs and heat and consequences for mistakes. I was considering renting one for a track day before buying but the cost of that vs buying seemed silly when I dug deeper.