7 replies to this topic 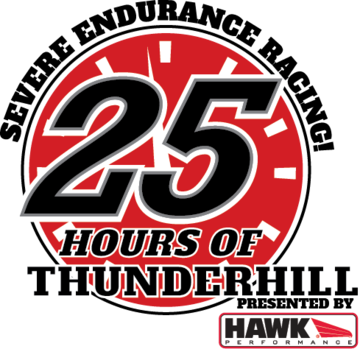 Have you registered your team?

Looking for more information on who will be there?

Wanting to crew for someone?

Are you a driver looking for a ride?

The 25hr Forums have answers to the latter part of these questions.

The NASA 25hr page can help you with all things 25hr.
October 30th is the last day to submit your team declaration.

Celebrating the 15th Running of the NASA 25 Hours of Thunderhill presented by Hawk Performance,  NASA is pleased to announce an amazing contingency partner for this year's running.

NASA has partnered up with ABK Beer to provide all teams with contingencies and all podium finishers with beer,  lots of beer!

ABK Beer http://www.abkbeer.com/ , Aktien Brewery dominated the worldâ€™s beer competitions from the late 1800â€™s, winning dozens of awards and Gold medals. Today, the Aktien Brewery continues to exclusively use only the finest locally grown Hallertau hops and grains from the same local farms they have been using for over 700 years.   Known now as ABK- Since 1308.   You will love this beer, itâ€™s fantastic!

So just how great is this?

And now the best part,  you can get 1-3 cases of ABK Beer at the 25,  just by running the ABK Decals on your racecar, and a Facebook post.   You read that right, FREE beer! 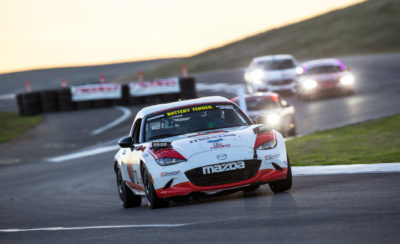 What started as a simple idea to have the longest endurance race in the U.S. has taken on a life of its own and, 15 years later, has blossomed into a significant U.S. racing event. The National Auto Sport Associationâ€™s 25 Hours of Thunderhill presented by Hawk Performance has not only attracted pro racers, it has also become a proving ground for manufacturers, including Mazda. It was the first race in which the Global MX-5 Cup cars competed, and last year Mazda brought diesel-powered Mazda6s to test in the twice-around-the-clock-plus-one-hour classic. While Mazda has no official presence for the 2017 edition running this weekend, Dec. 2-3, several Mazda teams will be competing, including a couple of previous winners.

The E2 class wins in the last two 25 Hours have gone to the Robert Davis Racing team driving â€œKermit,â€ a green and silver Mazda RX-8. That car has since been retired and the team has a new RX-8. It will be the only rotary-engine-powered entry on grid. Team driver Jeremy Barnes says the team has taken everything it learned from racing â€œKermitâ€ over the years and poured all of that knowledge and experience into the new car, which the team has been quietly developing this year.

Although rotary engines make prodigious power relative to their displacement, their fuel economy presents some challenges in endurance racing. With a stock fuel tank that holds 16.9 gallons, the team has to stop every hour to refuel. Barnes says the team incorporates fuel consumption into its strategy.

â€œWe know weâ€™re a lot more fuel thirsty than any of the cars that we run against, so itâ€™s making sure that the rest of the package is so good that we donâ€™t have a reason to stop other than putting fuel in the car and doing driver changes and tire changes,â€ Barnes says. â€œSo, if we can stay out of the pits and stay on track as much as possible, and just take care as much as we can the weaker points of the car, then we think weâ€™re going to be in a good place, and we certainly proved that the last few years with Kermit.â€ 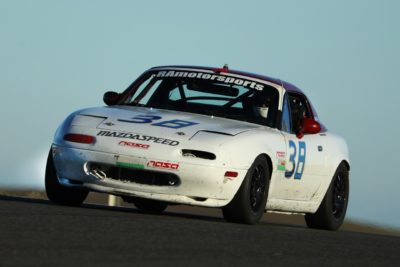 Team RA Motorsports owner Ron Gayman has two wins in the E3 class (2015-â€™16), and heâ€™s bringing the same two Mazda Miatas again this year. â€œThis year, we hope to gain a few seconds in lap pace, and be more competitive,â€ he says. â€œWe were not competitive in lap times last year. The fastest in the class were running 1:59s and we barely did a 2:03.â€

Gayman notes that luck plays a role in the 25 Hours of Thunderhill, and that heâ€™ll take it when he can get it â€“ but thereâ€™s much more to winning than good fortune. â€œPeople say itâ€™s all about luck. Well, luck is in the preparation,â€ he says. â€œThe simple thing is I put new parts on the car that we consider wear items or break items. We put new hubs, fresh brakes and rotors and a fresh motor, typically.

â€œLast year, we got lucky,â€ he continues. â€œWe were the only one that didnâ€™t break. We would have had a one-two finish if our other car hadnâ€™t broken.â€

Derrick Ambrose, owner of Corksport Performance, has helped out the official Mazda teams the last few years, but this year heâ€™s bringing the Mazda3 that he normally campaigns in SCCA Touring 4 to compete in the 25 Hours with a few upgrades. In addition, there will be a trio of Global MX-5 Cup cars entered in E3 â€“ two from Floridaâ€™s Sick Sideways and the other from Trim-Tex Racing. Other Mazda entries include E3 class Miatas from RJ Racing, Neth Racing Works, A+ Racing and Brown/Heyer; and Good Times Racing 2 is entering E2 with a Miata. Ice 9 Motorsports/Valkyrie Autosport is the lone Mazda-powered Elan NP01 entrant.

NAPA, CA., November 28, 2017 - Pacers, fans and family â€“ this year we will have ample amount of options available to you in order to follow all the action LIVE from the 2017 NASA 25 Hours of Thunderhill Presented by HAWK Performance. Live video broadcast made possible thanks to Toyo Tires. For the first time this year, we will have trackside cameras and LIVE video interviews from the hot pits so you can follow all the action as it unfolds in real time. Make sure to Like Us on Facebook and Follow Us on Instagram and Twitter. Check all the links to Live Video, Live Timing and Social Media below.

Event Coverage and Broadcast Schedule will be available at the NASA 25 Hour Website:

Live Timing will be available exclusively at:
https://racehero.io/orgs/nasa-norcal

Latest 25 Hour News will be posted to:
https://nasaspeed.ne...of-thunderhill/

The Toyo Tires/Flying Lizard Motorsports team took its third consecutive overall win in the NASA 25 Hours of Thunderhill presented by Hawk Performance on Sunday, marking only the second time in the endurance raceâ€™s 15-year history that a team has won three overalls in a row.

The Audi R8LMS took the overall lead just after sunrise Sunday and never looked back as the teamâ€™s main competition, a pair of Ginetta G57 prototypes, dropped out late in the endurance race because of mechanical issues.

â€œItâ€™s still fun to win them,â€ said driver Darren Law, who has helped drive the team to victory the past three years. â€œWe literally didnâ€™t touch any other car. Thereâ€™s not a mark on it and we didnâ€™t have anything go wrong. It was perfect.â€

Toyo Tires/Flying Lizard Motorsports is only the second team to have three consecutive overall wins at the 25 Hours of Thunderhill since the race began in 2002. Team Mercer Motorsports won overall in 2009, 2010 and 2011.

The Toyo Tires team did have a brief scare with 90 minutes left in the race when driver Nathan Stacy went into the dirt in Turn 3 and for a moment it didnâ€™t look like Stacy would be able to restart the Audi. Stacy got the car started and the team won by six laps over second-place overall finisher Calvert Dynamics/Competition Motorsports. Third-place overall finisher was Crowd Strike/One Motorsports.

More than 50 teams participated in the famed endurance race that tested driversâ€™ resolve against machine and fatigue. Much of the race is run in darkness, further challenging the field of amateur and professional drivers.

In additional to the overall champion, there were seven class winners crowned Sunday.

Despite having just one gear (fourth) for 12 hours of the endurance race, RK Motorsports/TC Design brought home the class championship in a 19-car-deep and competitive E0 class.

RK Motorsports/TC Designâ€™s Tony Colicchio was wondering if the string of bad luck at NASAâ€™s 25 Hours of Thunderhill would continue. Heâ€™s competed in six Thunderhill races and has crewed nearly every race since its start 15 years ago.

â€œIâ€™ve had some really bad luck here, especially given all my sprint races,â€ Colicchio said. â€œIâ€™ve actually qualified a car three times and not been able to start because the car has had some sort of problem. Winning it is pretty awesome.â€

E1
What a difference a year makes for the Trim-Tex Racing team. Last year, the team had transmission issues and just missed winning the class.

â€œWe were having transmission issues in 2016 and the same curse hit us again, but thankfully we were able to salvage it,â€ said driver Britt Casey Jr. â€œWe only lost one gear this time, and last year we lost every gear but one.â€

E2
KD Motorsports captured back-to-back 25 Hours of Thunderhill victories in E2 as the team dealt with a host of issues with the racecar.

The team was dealing with issues on the 1989 BMW 325is, from brakes to the transmission.

â€œWe lost every gear but fourth,â€ said team owner Kevin Doyle. â€œWe had oil pressure issues. We were down to our backing plates on the rear brakes, so it was metal on metal on the back. We were getting everything we could.â€

The team turned its fastest lap of 2:06.045 during the middle of the night, which crew chief David Stenner credits his drivers.

â€œHow we won the race was down to incredibly fast laps at night,â€ said Stenner, who beat second-place finisher RDR by five laps.

E3
Team RAmotorsports40 had a Mazda Miata stuck in fourth gear, but the drivers made the most of it to get the E3 class win at 25 Hours of Thunderhill. Even with the transmission problem, the trio of drivers were able to beat second-place finisher CorkSport Performance by 22 laps.

â€œLikely something is going to break on the car before the end of the race,â€ said driver David Biggar. â€œItâ€™s just how you manage it and then how you get through the rest of the race with that, and I think we did a great job.â€

ESR
Crowd Strike/One Motorsports won its first 25 Hours of Thunderhill, but it didnâ€™t come without complications.

A problem with the alternator required creative solutions to keep the open-cockpit car running. The team had to shut down fuel pumps, reduce headlight output and even turn off the steering wheel heater despite racing in temperatures that dipped in the low 40 degrees.

â€œIt was five hours of absolute thrashing,â€ said driver Kenton Koch. â€œWe had a couple issues with the alternator and keeping things charged, so we had half the lights shut off all night and we could hardly see straight. The only thing we had were the lights that point out so I could see the marks.

A pair of Ginetta G57 cars that were favorites to win the overall race and class had mechanical issues and dropped out late in the race. Normaâ€™s Last Chance finished in second, two laps behind Crowd Strike/One Motorsports.

GT Challenge
The lone car in the class, Toyo Tires/Flying Lizard Motorsports team had a water-line failure, but got it fixed and was able to get the car out in time to grab the checkered flag. The Porsche Cayman ended up 24th overall.

â€œIt was obviously a little disappointing the other teams dropped out, and I do believe that next year is going to be a pretty big group, because obviously anything Toyo does, they do it right,â€ said team manager Thomas Blam. â€œSo, we were happy to run the tires. We had a phenomenal run for the first 20 hours, and at one point we were sixth overall, which I think is pretty remarkable for a DOT tire. Weâ€™re hoping to be back next year and hoping to bring a couple of more cars with us.â€

Back to NASA Northwest