60 replies to this topic

Speaking of tech. I surely hope there will be no issues, but just in case:

Can we get a clarification on the rules of this contest? It says Podium ... but they take the podium pictures before the tech shed. So I would like to know if this will be for the unedited podium ... or if we will have to wait for the SMMD page to Photoshop the new faces on the podium.

Hmmmmmmm. I have decided:

But who is the "People's Champ" at this race?

But who is the "People's Champ" at this race?

There isn't one. PC at home, staying away from this soon to be shit show.

Does someone have a link to the entry list?

Does someone have a link to the entry list?

I have to support the Florida boys as best I can and Halderman is a robot at COTA. 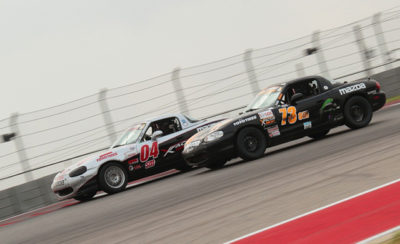 The Spec Miata field for the Toyo Classic at this weekend’s NASA Championships reads like a who’s who of SM racing in the U.S. At 83 entries strong vying for $130,000 – $75,000 to the winner – it’s a big field filled with some of the top competitors in the class.

With the event taking place at Circuit of the Americas, the Texas contingent certainly has to be considered to have an edge, but competitors from both coasts will be converging on Austin to unseat the favorites – and chief among the non-Texas crowd may be Todd Buras. The Floridian took a couple of victories in the May race at COTA, but right on his heels was local Blake Clements. The Spec Miata ace and driving coach who races out of Chris Haldeman’s X-Factor tent will most certainly be strong this weekend.

“I think it’s going to be a really good race,” says Clements. “We’ve had two races there this year, one with SCCA, one with NASA. We’ve been in the top five, top three, at those races. September in Texas, the conditions could be pretty much anything. I’m really confident if it rains. I think Chris [Haldeman] and I both have a really good shot.”

Haldeman won both SCCA races at the track in February, which attracted big fields just as the May NASA race did; drivers were eager to race on the track before this weekend’s big event, so it wasn’t just racers from Texas and surrounding states. Jim Drago, Danny Steyn, Nick Sommers, Nick Leverone, Voytek Burdzy, Jason Connole, Danny Soufi and Preston Pardus are some of those who have already made the tow to Austin this year, and all are capable of pulling off a win.

“You can’t count out the E Street guys,” Clements adds. “Jim Drago, Todd Buras and Preston Pardus have all shown this year that they can be very competitive at the track. I know they’re working just as hard as we are. And the other teams like OPM with Danny Steyn. [But] the surprise could be the California guys; some of them have been coming over and testing and I’ve heard that they’ve been doing some pretty good lap times too, like Justin Casey and Austin Newmark.”

A racer that sometimes gets overlooked but has shown he has what it takes to compete at COTA is Justin Crickenberger. He’s been in the top 10 just about every race he’s run at COTA this year, and he has X-Factor behind him. Crickenberger was fifth in last year’s Western States Championship, with Sommers second.

Being Spec Miata, and with this much prize money on the line, making reliable predictions is tough, and it could end up being someone not among the names we’ve listed that takes home the big prize. But we’ll know by Saturday afternoon, as the Toyo Classic kicks off at 2:15 p.m. Central time. Live broadcasts and timing will be available on https://nasachampionships.com/

Ha, thanks for the tip!