147 replies to this topic

Typically takes them a few weeks to final edit and post up on scca.com.

Thanks but I was look for all classes

Some races are now posted

GT2 and AS were entertaining. 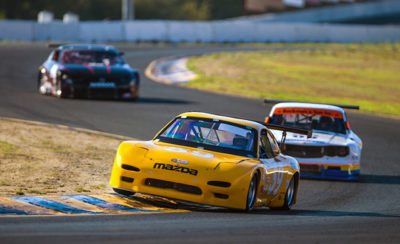 Jonathan Bomarito noticed a few things that racers needed help with at the Runoffs, and those lessons can be applied elsewhere

At the 2018 SCCA National Championship Runoffs, Mazda Motorsports once again brought some of its pro drivers to review video and data with club racers to help them improve their racing or setup. This year at Sonoma Raceway, it was Jonathan Bomarito, driver of the No. 55 Mazda RT24-P prototype in the IMSA WeatherTech SportsCar Championship, and Tom Long, who has raced everything from Spec Miata to the RT24-P. And during his coaching sessions, Bomarito noticed a few things many drivers could benefit from.

“Sonoma Raceway is a hard track,” he says. “With all of the elevation change and blind corners, this track takes a pretty high commitment level. Probably the biggest thing I’m seeing is down through the Esses. [Many drivers are] a little too abrupt and give too much of a lift. You should be trying to do everything you can to be very smooth with your inputs. Sometimes it’s better to do a long, smooth less-of-a-lift than a short, abrupt lift – this way you’re not upsetting the balance of the car in the Esses.”

Sonoma’s Turns 7a through Turn 9 are notorious for requiring precise car placement to get the most speed through that section and down to Turn 10. A small error early in the complex can be a big error by the time a driver is out of 8a. It’s not dissimilar to fast, winding sections at other tracks.

“VIR and Road Atlanta, those are very similar approaches to what you would take in a high-speed, transitional type of corner,” Bomarito explains. “Some of those techniques are good even for something like the Kink at Road America. It’s not an ess, but it’s a very high speed corner and you’re trying to do everything you can to keep the platform of the car as level as possible to not upset the balance, to give yourself the confidence to carry the speed through the corner. To me, that is one of the biggest things with driving a race car – doing things in the car to give yourself as a driver the confidence to attack the corner and push hard.”

Bomarito says that everyone he coached at the Runoffs was very receptive and willing to consider changes, and he was especially glad when drivers came back and told him they had dropped their lap time by implementing his suggestions.

“It’s a lot of fun for me to come out to the track and do this,” he says. “Mazda has such a huge grassroots participation, and this is the Runoffs. It’s a big deal; a lot of people spend a lot of their own hard-earned money to come out here and do this race. I think it’s great that Mazda steps up and helps the people that are supporting the brand.”

That was intense, fun and clean.  What a great class and an awesome track!

I have an opinion so I must be right