5 replies to this topic

Al's got an open seats for qualified driver. (not free)

Each year the competition at the 25 Hours of Thunderhill Presented by Hawk Performance gets tougher. That competition has everything to do with the talent teams put behind the wheel and the level of preparation they put into the cars.

This year, Eagleton is returning with another Mitjet sponsored by Big Data in Action and Exotics Racing. The team is being managed by current V8 SuperCars and Penske Racing driver, Alex Premat, who also will drive. Other drivers include current IMSA racers Mark Ramsey, Eagleton himself, Richard Wendell, EXR instructor Josh DeLosier and Jonathan Cochet, who is a former Formula 1 test driver for PROST Grand Prix.

With this impressive roster, Eagleton is gunning for a class win in E0.

“Alex is pretty modest, but he was a factory Audi Le Mans Prototype driver as well as a factory Audi DTM driver,” Eagleton said. “Both he and Jonathan have raced in the 24 Hours of Le Mans, so I feel like NASA has done a damn good job to attract this level of talent to our little round-the-clock race!”

If you are going to run in the 25 Hours of Thunderhill, it would be helpful to have a bunch of engineers on your crew, and that’s exactly what Team TAPG Motorsports is doing.
TAPG stands for Toyota Arizona Proving Ground. The team is comprised of Toyota engineers and technicians and family and friends. The team is taking on the 25 Hours of Thunderhill for the first time after winning five of the last seven races and the 2018 E1 class championship in the NASA Western Endurance Racing Championship series.

To prepare the car, the team’s target was to use little to no unproven components.

Team TAPG Motorsports has four drivers who have run the race previously, including hot shoe Randy Pobst, who has won the 25 overall in Davidson Racing’s BMW-powered Norma.
“The car/team is operated out of the Toyota Arizona Proving Grounds where we all work day to day in developing the dynamic performance of North American Toyota products,” said team principal D.J. Quint. “We are also very lucky to have tire support from Hoosier, suspension support from Motion Control Suspension, and brake pads from Carbotech. Despite this being this team’s first ever 25, we are approaching it with the target of an E1 class victory.”

While much attention in recent years has been paid to the Flying Lizard team that partnered with Toyo Tires to take the overall win three years in a row, another less-conspicuous team has taken three class wins in three years.

Competing in Mazda Miatas in E3, Team RA Motorsports has been putting in the late nights preparing its cars for the event. Team owner Ron Gayman said his team will be fielding three cars, and maybe as many as four. Three of the possible four will run in E3 and one will run in E0.

The E0 car is a Mazda Miata powered by a General Motors Ecotec four cylinder, which makes more horsepower than the stock Mazda engines. Asked whether his team’s past three wins put any extra burden on him, Gayman shrugged it off.

“No pressure to win a fourth,” he said. “We know if we just drive smart, we always have a chance. Just coming prepared is half the battle. Even then, crap happens! So, having things to fix the car is a must.

“We come to have a good time and finish the race, hopefully with no drama,” he continued. “And if several other cars are on top of their game as well, we always feel we will be there at the end!” 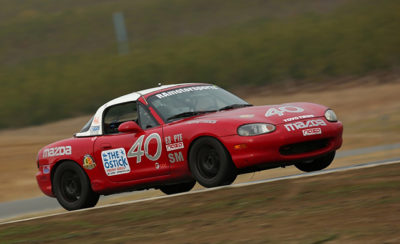 The USAF NASA 25 Hours of Thunderhill Presented by Hawk Performance is set for its next running this weekend, and several Mazda teams are preparing to tackle America’s longest endurance race, including a three-time winner looking for a fourth consecutive class win.

While Flying Lizard Motorsports gets much of the attention for its trio of overall wins, Team RA Motorsports has accomplished a similar feat, winning the E3 class three years running. Racing three Mazda Miatas in E3, the team has been putting in late nights to prepare for the grueling event, where weather is often as big a player as the other cars.

“No pressure to win a fourth,” says team owner Ron Gayman. “We know if we just drive smart, we always have a chance. Just coming prepared is half the battle. Even then, crap happens! So, having things to fix the car is a must.

“We come to have a good time and finish the race, hopefully with no drama. And if several other cars are on top of their game as well, we always feel we will be there at the end,” he adds. RA Motorsports has a fourth Miata entered for E0, that one with an engine swap.

Three other teams have Miatas entered in E3. A+ Racing has two cars on the entry list, one under “A+ Racing New and Improved” with a 1994 Miata and one under the ‘A+ Racing Same As Before” with a ’99. A+ Racing is spearheaded by Alvin Angulo, an auto shop instructor in the Placer Union High School District near Sacramento, Calif. The cars are built by high school students, with students also performing pit crew duties. Brown/Heyer also has a ’99 entered, and Team Neth brings a 2000 Miata.

Sick Sideways is making the long haul from Florida with two Global Mazda MX-5 Cup cars. One of them will be running in partnership with Shift Up Now, a program aimed at empowering women through motorsports. That team will have a stellar lineup of professional drivers, including Ashley Freiberg, Pippa Mann, Sarah Montgomery and Shea Holbrook, along with Amy Dilks.

“To be a part of this all female driver line up is honestly a dream come true,” says Battery Tender Global Mazda MX-5 Cup driver Montgomery. “I can’t believe I have this incredible opportunity to work with these formidable women drivers on team Sick Sideways. Racing in the Global Mazda MX-5 Cup Series for many years has taught me how important it is to introduce the sport to many young women. It has been a pleasure working with Shift Up Now to put this program together in my own race car and I honestly can’t wait for the race weekend.”

The driver lineup for the other Sick Sideways entry will be announced soon.

Those wishing to follow the 25 Hours of Thunderhill, which starts at 11 a.m. on Saturday, have several options. All can be accessed from nasa25hour.com. Toyo Tires is sponsoring a live broadcast with trackside cameras and live interviews from the hot pits. Go to https://livestream.c...rivenasa/25hour to directly access the broadcast. Live timing and scoring will be available through RaceHero and, of course, you can follow through Facebook, Instagram and Twitter.

Live Timing will be available exclusively at:

Latest 25 Hour News will be posted to:

This was a Sick Sideways car...not sure which group of Drivers. No idea what the BMW was doing

Need to hear Saul's response, likely be, the German engineering failed. Not funny by any stretch.

This was a Sick Sideways car...not sure which group of Drivers. No idea what the BMW was doing

WOW! Blake Clements !!! You aren't the only one to hit somebody on the pace lap anymore!

Back to NASA Northwest