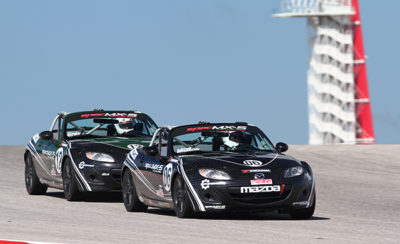 Tom Martin, along with Todd Lamb, one of the founders of the Spec MX-5 Challenge, explains that to get the series off the ground in 2019, the full-series, arrive-and-drive model was the only way to go. But as the series enters its second season, it is opening up to both single-race entries and competitors who bring their own cars. Martin expects car counts in the series, which will have 10 Eastern races and 10 Western races (five doubleheader weekends each) before meeting at Road Atlanta for a grand finale, to grow as a result.

“Part of the vision of the series from the beginning has been to have Spec MX-5 Challenge be the pro component of a large club racing class that runs the NC-generation MX-5,” says Martin. “To do that, we have to have more people touch, feel, taste and be excited by what we’re doing, and that means opening our arms to different ways of participating.

“As word gets out that you can run your own car and there are good contingency opportunities provided by Mazda for people who enter one or two events, that will encourage participation. We’ve seen positive response to that. One of our indications is we’ve already sold some new builds of cars. We have also sold a few cars out of our current fleet, because people like the price point of the used market rather than the new build market,” he explains.

The series is offering some incentives for those who buy cars out of its fleet, including credit toward running the series in 2019. There is also the option of running SCCA Touring 4-legal NC MX-5s, whether one is running select races or the full season. The series will require removal of the hardtop, and the minimum weight is lower than the T4 minimum. Other than those changes, the only requirement is to run the series’ spec tire, which is included in the entry fee.

For those running for the series championship, the reward is substantial. First place gets $100,000 to run races in Battery Tender Global MX-5 Cup in 2020, and second and third are rewarded as well. Drivers entering single races in T4 cars have the chance to win contingency from Mazda.

“We’re trying to provide enough funding that three drivers can go do another pro-level series, either another season of Spec MX-5 Challenge or Global MX-5 Cup, relatively painlessly,” says Martin. “The package we have from a probability standpoint is pretty darn good; if you’re competing with 20 drivers and there’s a three-in-20 chance that you get mostly funded for a follow-on season, those are pretty good odds.”

Costs for the season depend on how you want to do it. Renting a car from the series for the full arrive-and-drive experience is $45,000 for five doubleheader weekends. If a driver brings his or her own car, it’s $15,000. Single-weekend entries are $1,900. All of those packages include tires.

For 2019, the series is adding a sim racing challenge; the winner gets a test day in a Spec MX-5 race car at COTA. The sim races will run 10 days prior to the actual races at the track, so drivers will get a chance to practice racing on the track in the sim before the event.

The 2019 East season begins at VIRginia International Raceway on March 9-10; the West season starts at COTA on May 4-5. Both season openers will feature increased contingency payouts from Mazda for non-championship participants. For more information, see specmx-5.com.

Back to Mazda Miata - MX5