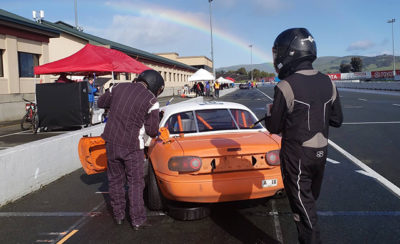 With a variety of endurance racing series to choose from, Mazda Motorsports takes a look at what makes ChampCar tick

The endurance racing series now known as ChampCar started out as ChumpCar – a play on the name of the long-defunct open-wheel series run by Championship Auto Racing Teams. The fact that the founders chose that name tells you a lot about it, and while it has grown and matured from its cheap-car beginnings, it hasn’t strayed too far from its roots.

“It was started in 2009 as kind of an offshoot of the [24 Hours of] LeMons,” explains Bill Strong, the marketing and media director for the ChampCar Endurance Series. “From the beginning, we wanted to be a place where racers go to start. If they like this endurance racing, they’re either going to stay with us or they’re going to move up to other series that allow a lot more. Most of the series out there, they don’t have stint limits, they have fast fueling. If there’s a customer out there that likes that, we’ll help them get started and get them out there.”

Like 24 Hours of LeMons, ChampCar started with “$500” cars, only without some of the theatrics and tomfoolery that went with it. But that price cap was difficult to comply with and hard to police, so the new metric is what the series calls the Vehicle Performance Index.

“We came out with a variable to equalize the cars as close as we could,” Strong explains. “A number is assigned to each vehicle, and any performance parts you add to the car then adds points. You don’t want to go over 500 points; once you go over 500 points, you start collecting laps at one lap per 10 points. The way it’s supposed to work is a 500-point car will finish the race, and a 510-point car will have had to do an extra lap, but the performance additions will make it finish on the same lap with a 500-point car. It doesn’t always work like that; but it’s pretty darn close, and our management has worked really hard to make that right.”

The point values for some popular modifications include 75 points for adjustable shocks; 50 points for an aftermarket camshaft; 20 points for a non-OE swaybar; or 10 points per corner for non-OE springs. A Spec Miata can run ChampCar, but those that have been doing it have realized that the points are better applied to engine improvements rather than suspension work. And many racers who love Spec Miata also love racing in ChampCar and other endurance series because those series offer creative freedom.

ChampCar hosts races across the country, 28 races in all this year. The minimum race length is seven hours, with many weekends consisting of a seven- and an eight-hour race on consecutive days. But they also put on a 14-hour; will do dual 10-hour races at Indianapolis Motor Speedway this year – the longest races ever held at the storied track – and a couple of 24-hour races at Nelson Ledges and VIRginia International Raceway.

ChampCar is one of three endurance racing organizations where Mazda Motorsports is paying contingency for the first time this season (we’ll take a look at the others, World Racing League and American Endurance Racing, in the near future). It’s a new initiative for Mazda, and one that’s been well received.

“We’re excited to have Mazda on board to help our racers out,” says Strong. “It’s a really big project that they’re doing and I think it’s going to attract a lot more Mazda vehicles to our series. There’s been a lot of talk up and down pit lane, especially among customers who have cars that may not be so reliable. The repeated quote has been: ‘If in doubt, go Miata.’ It’s race ready out of the box and pretty darn reliable as long as you use the quality Mazda parts, and you can go out there and race it to the best of your ability.”