AER Was Founded by Racers in Order to Race 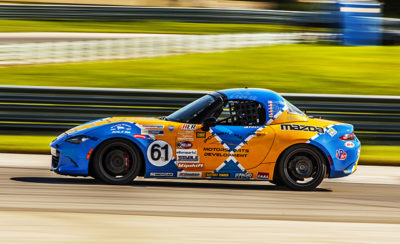 When a couple of amateur racers didn’t find the endurance racing series they wanted, they created it

American Endurance Racing isn’t the largest of endurance racing organizations, and they’re OK with that. Putting on seven events a year, mostly in the Northeast, the organization is seeking methodical growth of the series that started out when its founders decided the kind of racing they wanted to do wasn’t available.

“My partner, Ed Tatios, and I are amateur racers,” explains John Kolesa, the president of American Endurance Racing (AER). “We did sprint racing, endurance racing – at least what was available to us six or seven years ago. We liked endurance racing, but we didn’t really like what was available to us. We wanted something where we could race the cars we wanted to race and we wanted fair and competitive classing. We didn’t really think that was available, and that’s why we started AER. It’s the racing series that we wanted to race in.”

Kolesa and Tatios wanted a series for what Kolesa calls “legitimate” racecars – not cars that were rescued from a junkyard and built to meet a price cap. They were also frustrated by the way car classing worked in most organizations, both the spec model and the points and power-to-weight model.

“We never felt that they worked very well, particularly in endurance racing, so our classing is more performance-based,” he explains. “Our classes are based on qualifying times, so we monitor the times and we class the cars so they’re in competitive groups. We have about a dozen different ways we can sort the field to see where we think they’ll fit best. We don’t want to penalize a team based on one fast driver doing one fast lap. We want to put them in a place where, at the end of nine hours, they’ll be competitive.

“People who race in spec classes or other classes are skeptical of the way we class cars, but when they race with us, they always seem happy and feel like they get a fair shot.”

Kolesa uses that nine-hour figure because that’s primarily the way AER runs races – two nine-hour races over the course of a weekend. That’s based on practicality – many racetracks include nine hours a day in the rental contract; coincidentally, it also works well based on 90-minute stints, giving six stints in nine hours. AER mandates a minimum of three-minute pit stops. It’s enough time to fuel a car, but not enough that a team can perform the service leisurely.

“We didn’t want the teams to be able to buy an advantage with a fuel rig,” Kolesa says. “A team with regular 5-gallon jugs can fuel the car and get it out in three minutes. It doesn’t reward teams for having fancy equipment, but it does penalize teams that aren’t prepared and disorganized. It takes some of the competition out of the pit stops, but not all of it. We felt like we wanted the racing on the racetrack and not in the pits.”

He says that AER likes drivers to come with a license from one of the major racing sanctioning bodies, such as SCCA, NASA, IMSA, PCA or BMWCCA, or have had one in the past, but it’s not required. If they can demonstrate sufficient experience and have someone vouch for them, they’re usually good to race.

AER is looking at some longer races, or situations where they can race into the night. They’re also looking at hosting more events, but want to expand cautiously. Currently they host races at Road Atlanta, Watkins Glen, New Jersey Motorsports Park, Palmer Motorsports Park, Summit Point, Mid-Ohio and Pittsburgh International Race Complex. Many teams will do six or even all seven of AER’s events.

AER is one of three endurance-racing groups for whose racers Mazda Motorsports has expanded support, including contingency. For 2019, Mazda Motorsports is offering both cash and parts points, depending on the car raced and the race or championship won, to racers in AER, ChampCar and World Racing League. Of course, anyone who races a Mazda is eligible for membership in the Team Support Program, which includes technical support and discounts on competition parts and even new Mazda cars.