29 replies to this topic

Funny how these things come up just when you are having the same issue! Tom's description is spot on(I just had a friend who is a good electrical guy read the 99 schematic for me...his description was identical). My car would start first try sometimes...other times I have turned the key up to 20 times before it engaged the starter. When a no start situation, could never hear anything(solenoid)but the dash lights would dim every time. I swapped the starter...fired right up! Next day...nothing...doh!!! My clutch switch is still in the loop so that is my first thing to by-pass. After that it will be ignition switch!


Ron, the dimming dash lights suggest the switch is working and something downstream is pulling current, which would likely be the solenoid coil. Clean & crimp the spade connector just to be sure it’s not getting some but not enough, then try the jumper from spade to hot. Also Rap on the solenoid. If the jumper rest does nothing then it’s the solenoid.

Frank, unlikely the clutch switch if he has the pedal down/still through repeated attempts until it finally goes. That’s real typical of the solenoid wire/spade connector or the solenoid itself.

I interpreted the story above as dimming occurred before starter swap, but not after. It would be helpful to know if the dash DOES still dim.

BTW, solenoids don't draw all that much current (10ish amps... Maybe 20 momentarily for the pull current). Neither of those should cause the dash to dim, unless there is a bad wire UPSTREAM of the dash circuits causing excessive voltage drop on the way to the dash. The fuse protecting this circuit is 80amps. 10-20amps shouldn't matter.

But, the starter motor could certainly draw enough to sag the battery voltage, that's especially true for a stalled motor with a shorted winding or a bad contact on the commutator. If the motor doesn't spin, there's no back emf to resist the current flow. In that case it's a dead short resisted only by ESR of the battery, the battery wire, and the coil resistance. Could be 200+ amps.

Does the dash still light up? It should. If not check the main fuse.

If so, check the volts at the S terminal on the starter. Should be 12vdc when the key is in START and the clutch is IN.

If you get less than 12vdc (like <8ish), use Steve's starter button check above. If you hear a solid click but no spin, motor is bad (or field coil wire is not connected to M Terminal).

I would expect that a failing solenoid can draw enough to dim dash lights. Something is, unless as you say there is also a wiring issue upstream or low current available, or he’s not hearing the solenoid actuate and the starter is the load.

Dunno if this is easiest...but, its pretty easy:

I like it Tom. I have never done this on my own race car, I might as well do it too.

To clarify...key on and lights in dash come on. Key turned to "start" and one of 2 things happens...1. lights dim and nothing downstream including any kind of noise occurs. 2. dash lights dim and car starts!

It is very possible my original starter had a bad solenoid as does the new "used" replacement! I'm hoping the clutch "switch" is failing and taking it out of the loop solves the issue. But suggestions made for the starter small spade connector will be done! Thanks!

Dunno if this is easiest...but, its pretty easy:

I think I did the same thing: 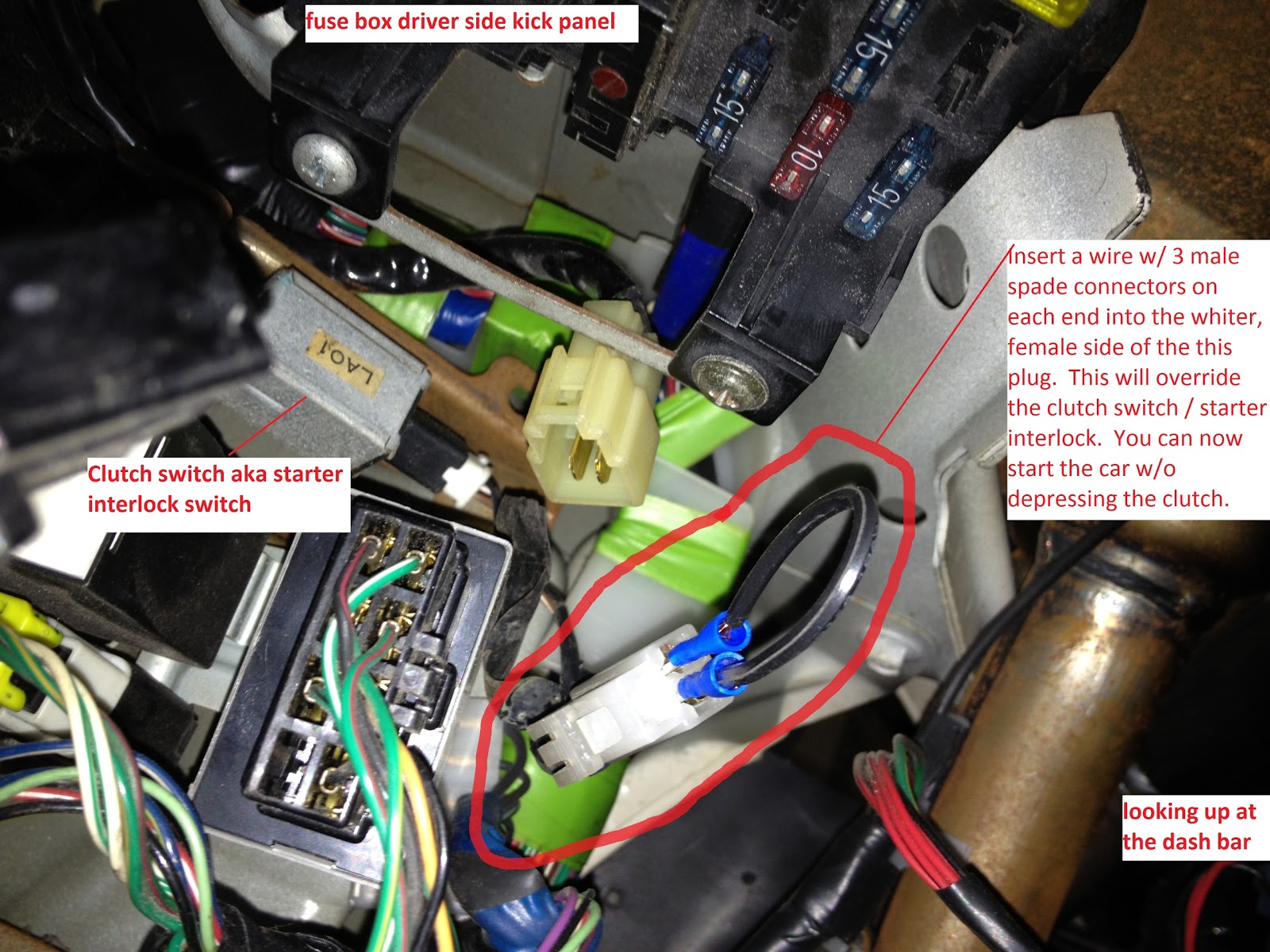 Ron, You have me very curious. When it does crank is it lethargic? If you have functional headlights, are they bright and do they dim with the dash?

Well of course the car came in and started every time. So i installed the new starter, checked all the grounds and connections, on the harness, used dielectric grease on the terminals and we will see what happens.

Just curious how many people bypass the clutch lock out? I am assuming its in the rules, its been awhile since i read them.

Ron, You have me very curious. When it does crank is it lethargic? If you have functional headlights, are they bright and do they dim with the dash?

Well...yes...I just assumed battery. And for whatever reason...the NB starters always turn over slower it seems?